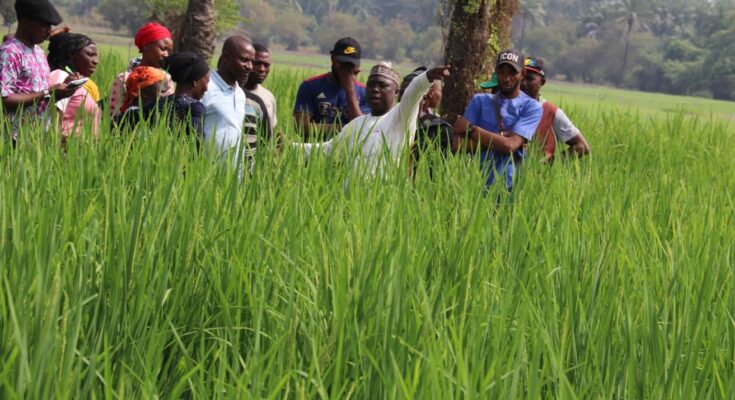 The FGN./IFAD-VCDP in its quest to enhance the livelihood and wellbeing of rural farmers, have commenced the training of VCDP farmers on best agronomic practices in the cultivation of rice during dry season in Kogi State.

Declaring the training exercise open in Lokoja, the State Programme Coordinator (SPC), Dr Stella Adejoh, stated that the training became necessary because of the devastating effects of perennial flood event, occasioned by Climate change across the globe.

Speaking further, the SPC emphasised on the need to embrace dry season rice farming because of the negative effects of flooding.

She pointed out that several farmers could not return to their farms as a result of colossal loss to their farmlands due to the massive flood across the state in 2022.

Dr Stella appreciated the IFAD/VCDP for organising such an important training to enhance the knowledge and build the capacity of the rice farmers in the state.

She admonished the trainees to take full advantage of the programme to better their lots in dry season rice farming.

According to SPC, VCDP is a programme like no other, always thinking of the best way out for its farmers especially the rural farmers in the state.

”This training programme covers all the four VCDP rice producing LGAs of Ajaokuta, Ibaji, Lokoja and Kabba/Bunu respectively,” she said.

Dr Stella opined that those involved in the training were beneficiaries of Rural Poor Stimulus Facility (RPSF) as well as those of Flood Recovery Strategic Inputs.

Giving the overview of the training, an Agronomist/Consultant from BUMATHA Venture, Prof. Alhassan Usman, explained that the exercise was aimed at supporting the farmers to building their capacity on Climate Smart Farm Management, Post Harvest handling, Decision making, among others.

He also noted that the programme was intended to provide technical extension services to farmers so as to increase their productivity.

The consultant took his time to demonstrate to the farmers on some issues such as site selection, land preparation, nursery practice and trans- planting, rice spacing during planting, application of fertiliser and chemicals as well as other best agronomic practices.

Some of the trainees across the four benefiting LGAs, commended VCDP for the training describing it as a timely intervention to boost their productivity during the dry season farming, alleviate their suffering and cushion their loses due to flood disaster.

Mr Kudu Abubakar from Kabawa cluster in Lokoja, thanked VCDP for the gesture, saying the training would enhance the farmers knowledge in best agronomic practices thereby increasing their yield.

”We are very grateful to VCDP for always remembering the poor and vulnerable farmers in the rural areas of the state.

On his part, Mr Tijani Umoru from Ajaokuta, said that the farmers were impressed by the timely intervention of VCDP, assuring that they would utilise the training received in order improve on their productivity and better their standard of living.

Another trainee from Ibaji LGA, Mrs Grace Omachonu, thanked IFAD-VCDP, Kogi State Government and Dr Stella Adejoh, for the support so far, noting that farmers would not let the programme down.