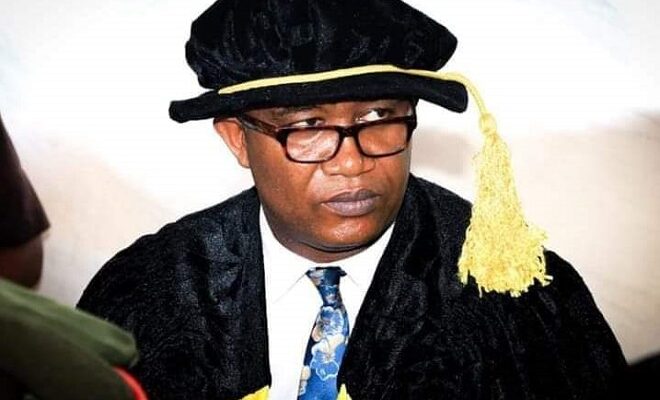 The Rector Korean- Nigerian Institute of Vocational and Advanced Technology, Mr. Charles Williams Oluwatoyin has warned students of the institution against cultism, examination malpractices and other social vices as culprits would be fished out and punished accordingly.
The Rector gave the warning on Wednesday during the 2022/2023 Matriculation ceremony held on the Lokoja campus of the institution.

The rector who noted that today’s Matriculation ceremony which is the 3rd in the Institution, is the first he is presiding over since his appointment as the Rector of this great institution on 2nd September, 2022

The Rector who said , the Matriculation marks a milestone in the life and a giant leap into greatness and attaining destiny, urging the students to maximize the opportunity created by the institute to achieved their desired goals in life.
He said the institute , the first of its kind in the sub saharan Africa has become a veritable institution for the training of skill manpower for the nation, saying the world is in need of knowledge based individuals to help drive the economy.

He advised the Students to recognise the opportunities that is inherent in the institute and developing the ability to take full advantage , exploit them to add value to their future.
” .NKFI is world class, with world class equipment and highly trained, world class lecturers. while you are here, seize this great opportunity to tap from their wealth of knowledge and become great as Nobody has passed through here and remained jobless. Rather, they go into the world and rule.
“NKFI is strategically positioned to prepare you with the right knowledge, skills and attitudes to enable you to meet up with the expectation of the emerging world. As you can see for yourselves, our facilities are top notch, our class room learning facilities are fully adequate and are air conditioned.
” while we are an academic institute saddled with the responsibility of providing academic excellence, creativity, and discipline, you have limitless opportunities to excel in any virtuous endeavour. However, the institution has zero tolerance for all vices including cultism, examination malpractices, fighting, cybercrimes, violence, gangsterism, stealing and indecent dressing. He warned.

While commending Governor Yahaya Bello for appointing him, the rector of the institute promised to work hard to actualise his vision of making kogi number one education state in the country.
He equally commended the partners, Korean International Cooperation Agency (KOICA), the Korean Government who are playing tremendous roles in furthering the developmental growth of the Institute as it strives to deliver academic excellence to its students.
The rector however appealed to Governor Bello to help in constructing hostel accommodation, administrative blocks as it will serve as a motivation for the potential admission seekers to make the school their right choice., and to ensure that courses offered get full accreditation.

While soliciting support from AEDC,IBEDC and several other technologically oriented organisations within and outside the domain to make the most of the arrays of courses by sending their staff to NKFI for up to date knowledge of latest technology advances, assuring them of value addition to their services.

Oluwatoyin who was satisfied with the number of intakes , thank those who have responded positively to sponsoring young persons at NKFI on scholarship, top amongst which is the Chief of Staff to the Governor, Pharm. Abdulkareem Moh’d Jamiu, the Speaker Kogi House of Assembly, Rt Hon Matthew Kolawole, the MD CEO Majesty West Africa Limited and A friend of the Institute HRH, the Alapata of Apata, Oba Dr.Fredrick Balogun.
He disclosed that the institute is in partnership with universities and world class firms from the United States in the area of Cyber security, Project Management and Data Science.

Earlier, Governor Yahaya Bello commended the Rector , for the transformation of the institution that drawn huge number of matriculants, and thank the students for choosing the school.
The Governor who was represented by the Commissioner for Education, Science and Technology, Wemi Jones advised the students to take their studies seriously and to avoid acts that will be detrimental to their academic progress .
In a remark, the Alakpata of Akpata , Oba Fredrick Balogun promised to donate enough land for the construction of permanent site of the institution
Meanwhile, one hundred and fifty students cut across five Departments; Electrical/Electronic, Computer and Software Engineering; Welding/Fabrication, Automative Mechantronic and Networking and system Security were admitted for 2022/2023 session.