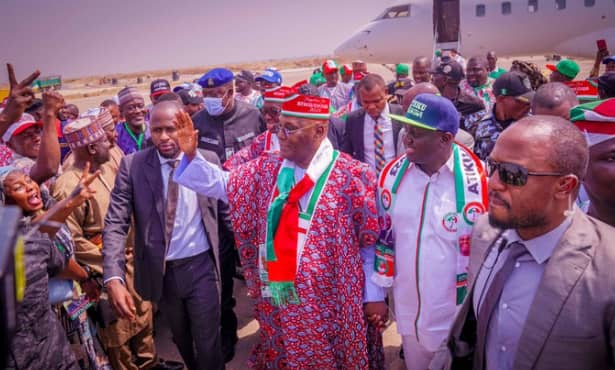 The presidential candidate of the People’s Democracy Party (PDP) and former vice president, Alh Atiku Abubakar has urged Nigerians to use their vote to change the APC in the forthcoming election.

Atiku Abubakar, who was addressing mammoth crowd of supporters that thronged the Minna Trade Fair Complex, venue of the PDP presidential campaign rally, asked Nigerlites to honestly compare APC and PDP administrations in the state.

He said all the developmental projects the people were enjoying in the state were the ones provided by the PDP, stressing that when the party is voted back to power, it will continue where it stopped.

Alh Atiku decried the worsening insecurity bedevilling the state and promised that when elected as president, his government will frontally confront insecurity and bring peace to the entire country.

The National chairman of the PDP, Senator Iyorchia Ayu called on the people of Niger state to vote out APC. He said APC was responsible for the hunger, poverty and insecurity revaging the land.

He said Niger state with its vast land space and arable agricultural potentials would be turned into tangible wealth for the benefit of the people of the state by Alh Atiku Abubakar. He said the only sure way to achieve this was to vote for PDP at all levels of the election.

He expressed happiness that prominent politicians in the state were “coming back home” to the PDP, adding that the party will continue to accord them all the privileges of party members

The Director General of Atiku/ Okowa campaign organization and Governor of Sokoto state, Aminu Waziri Tambuwal had promised that Atiku Abubakar will complete Baro port and fix all the federal roads in the state.

He said the people of the state were scamed by the APC who came to commissioned an uncompleted project in Baro port and urged them to vote out APC and vote for the PDP for more dividends of democracy.

He said “we will complete Baro port because we started it. The APC played you 419. But don’t worry, the opportunity is here to pay them in their own coins. Vote them out and vote us in and we shall complete Baro port and construct all the federal roads in the state”, he said.

Highlights of the presidential campaign rally were the presentation of flag to the governorship candidate in Niger state, Alh Isah Liman Kantigi and welcoming of the defectors